Give your 950/990 Adventure the looks and the practicality of a rally bike with a reasonably priced kit.

Let us set the record straight! This bike is the one that gave to the public ‘Dakar’ looks and off road capabilities beyond belief for its size. A winning Dakar bike, a formidable traveler and one of the best all round bikes in the world. Let us reveal the true beast that is hiding in your 9×0 bike.

We are actively involved in the Rally scene since 2013. We were one of the first companies in the field that had access to the KTM Carbon tower. So much, that we understood that this is so complex, that no ‘local garage’ can replicate it. It must be done by a proper, composite company. Thus, remaining true to the brand’s heritage, we designed a navigation tower like no other. Easy cable access, strong yet flexible to protect your valuable gear, this tower can be transformed either to a digital setup using HighwayDirtbikes unique iPad and iPhone cases, or to a rally cockpit using the winning Aurora Rally Equipment products. Materials are chosen carefully to allow the assembly to be strong, yet flexible so that your equipment is always protected, even after a crash. See our ‘Tech’ section for more information and pictures of how the tower performs during a crash! The only tower for 701 in the market that comes with preinstalled special rivet nuts making installation a real joy! 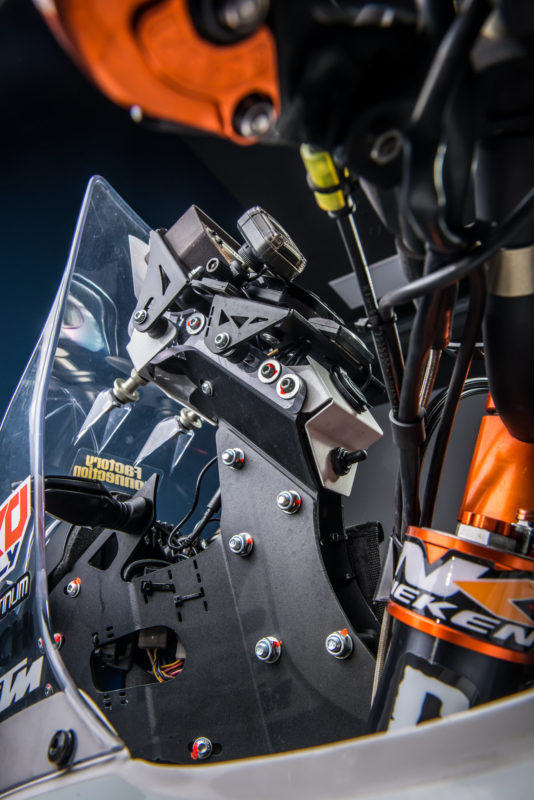 Ask before you buy because other ‘bolt on’ kits you’d have to assemble even all the Dzus fasteners with their retaining clips. In Aurora 9×0, everything is pre-assembled. The kit can be installed in a few hours easily on the bike and off you go!

0 from 5Based on 0 reviews
Schrijf je eigen review